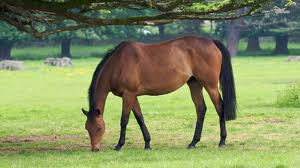 How do you know my horse has worms?  How do you know you got rid of the worms my horse had?  These two questions were commonly asked when I dewormed horses as a general equine veterinarian.  My standard response was that the drug companies tell us they work.

When the daily dewormers came on the market many of my clients requested that I get these dewormers for their horses.  I often told them I thought it was unnecessary because most of the horses were already being dewormed every 2 months.  In addition, 90% of the horses I cared for in southern California were kept in clean box stalls 22 hours a day except when they were being ridden or exercised.  I did not see how these horses could have many worms, if any at all.   Therefore, I decided to seek the answers to these common questions for myself by doing fecal egg counts before I dewormed my client’s horses.

What I found was that less than 1 out of 20 horses had any eggs in the stool sample to indicate they were infected with adult worms.  After consulting with several experts in equine parasitology and recognizing that no one was performing routine fecal egg counts for horse owners, I started Horsemen’s Laboratory to fill this void.  I felt owners should have the opportunity to know whether or not their horses had worms rather than just treating them blindly.

Stool samples will also indicate which horses are passing the most eggs and therefore identifying the worst contaminators of the pasture.  Horses can then be dewormed according to how rapidly they are spreading eggs that will become infective larva on their pasture and in their environment.  Research shows that 20% of the horses in a pasture are responsible for 80% of the eggs in a pasture.

HORSEMEN’S LABORATORY has made it affordable and convenient to have fecal egg counts done on your horses.  Visit www.horsemenslab.com or call (800) 544-0599 and take advantage of this great service to help protect your horse from worms.