Does sending your horses stool samples through the mail affect the accuracy of the count? Also, does the temperature or time of year affect this accuracy? Here is what Horsemen’s Laboratory has found out about sending horses stool samples through the mail for thirty years. The most important factor affecting the accuracy of fecal egg counts on a sample sent through the mail is that the sample is firmly packed in the small plastic container so there is not oxygen for the eggs to be exposed to. Eggs need oxygen to start the embryonation process and to hatch.

When Dr. John Byrd first started Horsemen’s Laboratory, he was concerned with the question about preserving samples through the mail. He met with Dr. Drudge and Dr. Lyons at the university of Kentucky, two very respected veterinarians that were leading researchers in equine parasitology, he asked them if they thought sending stool samples through the mail was possible, and they both agreed it would be. He developed the packaging for the samples that we use today. We noted a rather strange phenomenon when we received several samples in the same envelope. Some of the samples contained eggs that had hatched and other samples in the same envelope, none of the eggs had hatched. 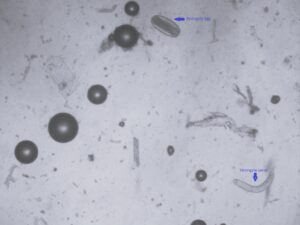 The unhatched eggs all appeared as if they just been passed from the horse. He thought maybe there was a different species of strongyles, and it took them longer to hatch. When he met Dr. Nielsen, he had been involved in some research that indicated that if oxygen exposure was limited to the sample the eggs didn’t hatch. So, we recommended that the plastic containers be firmly packed with stool to eliminate exposure to oxygen. Since then, we hardly ever find eggs that have hatched and the samples that contain larvae are ones where the sample wasn’t firmly packed and there was space for oxygen. 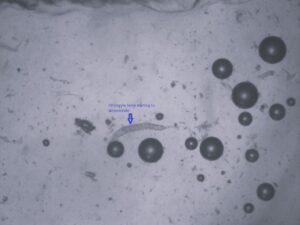 Some horse owners have also expressed concern that the time of year and temperature may have an effect on the fecal egg count. Horsemen’s Laboratory has found that in review of the data of 120,000 samples is there is very little variations in the percentage of horses that are positive for worm eggs in the stool throughout the year. The results also indicated that the temperature when the samples were mailed did not affect the results substantially either. The percentage of positive horses average 38.5% for the months of January and February and 37% of positive for July and August. The percentage of samples that are negative, positive, low, medium, or high shedders of eggs remains nearly the same throughout the year. In conclusion, no matter the time of year the samples are sent as long as the samples are properly packed to eliminate oxygen exposure the results will be accurate.