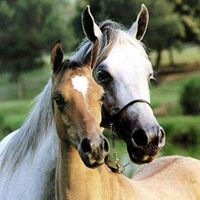 Selective breeding of parasites for resistance has been occurring since the time the first deworming medications were developed and used. As the use of these medications increase the speed at which resistance to parasites developed increases as well. This phenomenon also occurred in other fields as well such as bacteriology and agriculture (insect pest and weed control). However, this article is focused on equine parasite control. I say control because most veterinarians that study parasites believe now that we will never be able to eliminate them from the horses’ environment but rather only control them so they do not affect the health of the horse.

Here is how that has occurred. Every time one deworms with a certain deworming
medication all the sensitive worms are killed leaving the resistant ones to
mate with other resistant ones that produce more resistant ones that will not be
killed the next time that particular medication is used. When this process is
repeated over and over a higher percentage of the parasite population is
resistant. Once this occurs the resistant population never returns to being
sensitive to that particular medication, thereby causing that medication to be
useless against that particular population of parasites. The next step in the
spreading of resistant parasites is when horses from a farm or stable are sold,
or for some other reason, are taken to a different farm or stable and dewormed
when they arrive at their new home with the medication that the parasites, they
are carrying are resistant to so, it is not effective. Then the horse is turned
out with another horse and contaminates the pasture with eggs from the resistant
parasites thereby infecting other horses on the new farm with the resistant
strain of parasites.

Daily dewormers seem to have had a significant part to play in this rapid development of resistance. Killing off all the sensitive parasites every day and leaving the resistant ones to mate with each other on a daily basis most likely caused the population of certain parasites to increase the percentage of resistant ones more quickly. Therefore, the dewormers we have are losing their
effectiveness and there are not any new deworming medications being developed.

Experts tell us that by doing fecal egg count on horses and deworming only horses that need it we can reduce deworming by nearly 80%. This reduced exposure
to deworming medications should greatly slow the rate of parasite resistance development.

In conclusion, monitoring your horses’ egg count could reduce how often you need
to deworm your horses to once or twice a year rather than 4-6 times a year. The
bigger picture is the effect it will have on keeping the dewormers we have
effective longer so we can all protect our horses’ health longer.