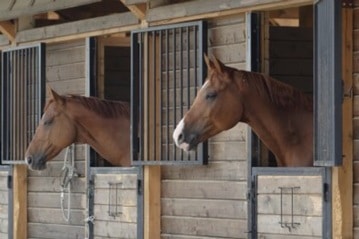 Dr. Craig R. Reinemeyer and Dr. Martin Nielsen have come up with the 10 Commandments of Equine Parasite Control.  Many of these “commandments” seem counter to what I learned when I was in Veterinary School so long ago.  However, since the problem of worm resistance has remained a concern a new approach must be taken to control the development of resistance.  Dr. Reinemeyer and Dr. Nielsen along with many others have done extensive research on the development of resistance and have come up with this list of rules; they call commandments, to help slow the rate of resistance development.

Below we have listed the 10 Commandments and the rationale for following them as they appear in the Handbook of EQUINE PARASITE CONTROL written By Dr. Reinemeyer and Dr. Nielsen, First Edition 2013.

Commandment #1
Don’t use an anthelmintic without knowing its efficacy against the intended parasite population.

The Rationale
The prevalence and intensity of anthelmintic resistance have become so great that none of the anthelmintic drugs can be assumed to have 100% efficacy in every circumstance.  The absolute starting point for all treatment regimens is to routinely evaluate the efficacy of available drugs.

The Rationale
Transmission of parasites is a biological system, and its intensity fluctuates with the seasons, the susceptibility of host populations, and innumerable other details.  Although it may be easy to remember, it is totally illogical to implement parasite control as a regularly scheduled transaction, like a mortgage payment.

The Rationale
Anthelmintic drugs differ in their antiparasitic spectra, and one drug cannot be substituted blindly by a different product. The choice of drug depends on which parasite species are present, and the goal of the treatment. Contrary to conventional wisdom, there is no scientific proof that drug rotation delays the development of resistance.

Commandment #4
Don’t treat adult horses during the season when environmental translation is minimal (unless there is a clear clinical indication to do so).

The Rationale
If parasite transmission is controlled during the seasons of active translation, treatments outside this interval are unnecessary. In nearly every climate, there are substantial intervals during the year when environmental conditions are unfavorable for parasite transmission, and anthelmintic treatments at those times are potentially harmful.  Strongyles are the major parasites of adult horses, and they follow these rules very closely.

Commandment #5
Don’t treat the entire herd just prior to a move to clean pasture.

The Rationale
The traditional “treat-and-move” strategy is now discouraged because it contradicts current knowledge about the importance of parasite refugia.  Clean pastures harbor minimal refugia, and the first eggs to contaminate this new venue will all be produced by worms that survived the recent deworming.  This practice introduces strong selection pressure for the development of anthelmintic resistance.

The Rationale
The sole reason for treating pregnant mares was to prevent the transmammary transmission of Strongyloides westeri to foals.  However, this parasite has become uncommon, it is not a serious pathogen, and foals of treated mares can still acquire infections from free-living populations on the pasture.

The Rationale
Although butterflies and dandelions disappear in winter, frost does not kill strongylid L3s or ascarid eggs.  As outlined in answer #4, winter treatments in a northern temperate climate are unnecessary, and could even produce some risk of triggering larval cyathostominosis.

The Rationale
Under-dosing has been identified as a definite risk factor for the development of anthelmintic resistance.  Pharmaceutical companies and the FDA take considerable pains to ensure that the label dosage of any product is both safe and effective.  Under-dosing carries no assurance of efficacy, and its intentional implementation by a medical professional is irresponsible.

Commandment 9
Don’t use anthelmintic formulations that are not labeled for horses, or administer them by a route that is inconsistent with label directions.

The Rationale
The pharmacokinetics and metabolism of drug formulations intended for administration to other animal species, or via other routes of entry, are generally unknown and hence accurate dosages cannot be extrapolated.  This practice introduces considerable risk of under-dosing, and the possibility of illegal drug resides when employed for food animals.

Commandment #10
Don’t use one standard treatment program for all horses in a stable.

The Rationale
Individual horses within a herd differ greatly in the numbers of worms they harbor, the degree to which they contaminate the environment, and their susceptibility to reinfection.  In addition, juvenile horses might harbor Paracaris equarum, which requires separate treatment considerations, and a horse shedding very high numbers of strongyle eggs should be treated differently than a consistent low contaminator.  Treatment needs must be tailored to the individual.